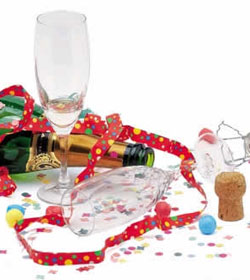 New Years Eve is a day to celebrate the end of one year and at the stroke of midnight, the beginning of a new year. To celebrate New Years Eve many British hold parties and invite friends and family to them.

Regardless of where you are on New Years Eve, there is a tradition of counting down to midnight and people hug and kiss each other and wish each other a “Happy New Year”.

Most people will be working on the day of New Year’s Eve, as this is not a bank holiday; although in recent years many companies have decided to close their doors regardless of this. For those that are working, this day is usually  very relaxed and a day when employers usually allow their staff a little leeway, and quite often let them go home early.

Come the evening, a huge percentage of the UK population, especially the younger folks, will welcome the New Year in by attending a party or some other event. The younger generation tends to spend most of the evening in a bar, and then move on to a night club, whilst the older generations seem to prefer smaller house parties, usually with family. Either way, New Year’s Eve is the one night of the year when drinking to excess is excused and partying to the max is encouraged.

Over the last decade fireworks on New Year’s Eve have become an increasing feature of the celebrations. There are government firework displays, usually televised with live celebrity presenters.

Each year the firework display on London’s South Bank seems to become larger and more impressive, and millions of viewers tune in to witness the spectacle, whilst the brave make the pilgrimage to the centre of London on a cold December night.

Ten years ago the New Year’s Eve countdown was usually something that happened locally, at home or at the party or event you were attending. Now, much like the firework displays, the national countdown to midnight is a televised affair, usually part of the same programming which carries the firework displays. Huge display screens are set up in every major city throughout the United Kingdom and the nation celebrates the coming of the New Year as one.

Most major public transport networks provide at least a skeleton service throughout the night, to help people get home after the celebrations.

New Year’s Day is a designated public holiday in the UK, and this is probably for the best, as this is the single day of the year when a high percentage of the population will be suffering from lack of sleep and very possibly a hangover. Almost everyone will have stayed awake until midnight the night before to welcome in the New Year, many people will have stayed awake far longer.

Because New Year’s Day follows such a heavy night as New Year’s Eve  it tends to be a fairly subdued day in most homes. A time to be with family and friends.

New Year’s Day at the Pub

Most years this will be a pretty quiet affair, unless New Year’s Day happens to fall on a Friday or Saturday, meaning no work the next day for most people. On these days, quite often a smaller celebration similar to New Year’s Eve will happen in a spontaneous way. Around lunchtime many people will pop into their local pub for a “hair of the dog” to brighten them up after a long night, and to wish a Happy New Year to their friends.

Many people see the New Year as a time of renewal, out with the old and in with the new and a time for a fresh start – a  New Year’s Resolution. People will tend to pick one (or sometimes more) thing that they intend to change in the following year. For many it will be something tangible such as giving up smoking. For others it is something less definable, such as trying to be happier. People encourage each other to keep their new year’s resolutions, and every now and then somebody might even make it! It is not sure where this tradition stems from, but there are some parallels with religious celebrations such as Yom Kippur and Lent.